History of Hortencia’s at the Cliffhanger 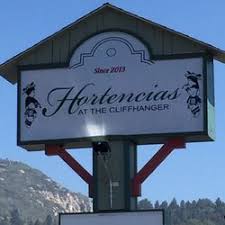 Founded in 1891, the idyllic town of Lake Arrowhead takes its name from an arrowhead-shaped rock formation at the base of the mountain. You can still see the namesake as you ascend Highway 18 from San Bernardino. Throughout its history, various people groups have called the mountain home. Some of their landmark structures withstood the ravages of snow and wind and remain active to this day. One of the most iconic of these buildings is The Cliffhanger Restaurant (currently known as Hortencia’s at the Cliffhanger).

History of A Lake Arrowhead Landmark 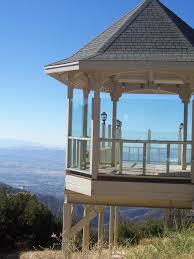 Originally a service station and café when it was built in the 1920’s, the Cliffhanger literally hangs over the side of the cliff on Highway 18 in Lake-Arrowhead’s neighboring city, Crestline. TheAlpenhorn News describes the site like this: “The view on a clear day is over 100 miles, all the way to Catalina, 26 miles across the Pacific Ocean from the coastline.”

Although the service station eventually closed, The Cliffhanger was converted into a series of dining establishments, until closing its doors in the 1990’s. The restaurant was modeled after a chateau, to compliment architectural elements of nearby San Moritz and Lake Arrowhead, with a steep roof and intricate trim.

In the early 1980’s, owners renovated the restaurant to double its footprint, adding a lounge, bar, dance floor, observation deck and gazebo. Numerous couples booked the location for weddings on the deck, taking advantage of the nearly 5,000-foot stunning backdrop. Unfortunately, over the years, the location on the edge of the cliff made the structure vulnerable to wildfires which threatened Lake Arrowhead, Crestline, and the surrounding region. The Old Fire, in 2003, nearly destroyed the building. But firefighters saved it with an experimental fire-repellant gel.

Shortly after the fires, the Cliffhanger served as the backdrop for several movies, including the 2007 film, Next, starring Nicolas Cage, Julianne Moore and Jessica Biel. Production staff built an exterior façade to make it look like a motel. Several buildings were erected in the parking lot, and the real-life, steep drop-offs served as the backdrop. The area also played host to the crew filming a Christopher Pine indie movie, Small Town Saturday Night.

The Cliffhanger sat empty for many years, until 2016, when the refurbished property opened under the name Hortencia’s at the Cliffhanger. Hortencia’s now serves up live music, fresh and light Mexican fare, and unbeatable views. Open daily from 8 a.m. – 10 p.m., The Cliffhanger has earned its reputation as a historical “must see” when you vacation in the Lake Arrowhead area.

Are you ready to book your romantic getaway? At Arrowhead Property Rental in Lake Arrowhead, California, we offer lodging to fit all tastes and budgets. For individuals, couples, families and groups, with stays of days, weeks, or months, we have what you need — all at great prices, with unbelievable amenities. Check out the possibilities. Holiday rentals fill up quickly. Don’t delay. Book today.